I had heard about Yellowstone growing up, but was surprised to find out how (relatively) close it is to Calgary. Although you could get there in one (long) day, we haven chosen to stay in Great Falls overnight both times we’ve gone. We went for the first time last year when Gordie was just over a year and enjoyed it so much that we went again this year.
I’m definitely not an authority on Yellowstone, we were only there for a few days both times. What I’ve written is more what I would say to a friend over coffee before she took her kids to Yellowstone.
Be sure to look at my tips on Taking Your Kids to US National Parks, Gordie’s Favorite Things In Yellowstone, Things to See Around Old Faithful, Things to See in Other Geothermal Areas,  Other Things to See In Yellowstone and Wildlife of Yellowstone.

The first time we went to Yellowstone we stayed in a hotel in West Yellowstone. It ended up taking a long time to get back into the park because in addition to the actual distance, bison like the area and wander across the road (and along the road) and people blocked the road as they stopped to take pictures.
So for our trip this year we looked into getting lodging inside the park itself. We found out that you need to book in advance, even when we were booking in December for our trip in Ju 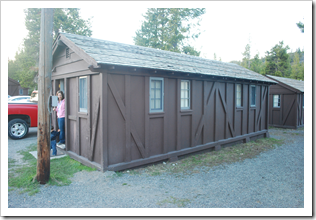 ne, it wasn’t easy to find 3 consecutive nights. Although I would stay inside the park again, I wouldn’t stay at the same place all three (or whatever) nights. Yellowstone has a few lodging areas and if we were staying for 3 nights, I would stay at 3 different places in the park. It would be a bit of a pain to pack up every day, but then you don’t have to spend so much of your time just driving back and forth.
Staying inside the park is not going to be for everyone though. The rooms are surprisingly well priced as the rates are price controlled, but may lack some of the amenities you would like. The cabins and lodges do not have radios, TVs, air conditioning or internet. Not all rooms (even in the lodges) have their own bathroom and those that do will typically have a shower but no bathtub.

We didn’t spend a lot of time in the cabin, we were out early and came back late and Gordie had his afternoon nap in the car. So it was really all we needed.
We stayed in a cabin by the Old Faithful Lodge that did have a bathroom. These cabins are small and a little austere. The picture you see of the outside of the cabin is misleading as each cabin is a duplex with two units inside it. In the picture I took of the inside of the cabin I am standing in the doorway. There is a small desk to the right with 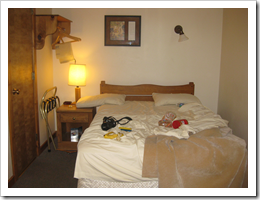 a kitchen chair, and to the left is the bathroom and the sink. There is a small heater, but it was still cold enough the first night that we didn’t think Gordie would be warm if we set blankets up on the floor for him to sleep on. I expect the cabins get pretty hot in the summer and there is only a small fan in the room.
If you are planning on staying in a cabin with kids you really want to think about your sleeping arrangements. The one bedroom (with a bathroom) cabins have only a queen bed (and not a generous one at that) although there would be room to set up an air mattress or cot or two on the floor. The hotel will supply playpen cribs for children under 2 years old. Gordie ended up sleeping between us on the bed, but if he was any older this wouldn’t have been a functional solution. There are cabins with two beds, but you have to share a communal bathroom.

Gordie struggled to fall asleep in the cabin (in part because we kept him out too late 🙂 because there is just no way to give him any distance from us to let him fall asleep on his own – without leaving him by himself. There is only one chair and the room is so small you just can’t help but be right there in front of him.

Overall though I’d really recommend staying in the park if you are planning a trip in advance. The lodgings are reasonably priced, it cuts out a lot of time in the car and you don’t want to spend a lot of time in your room when there is so much to see in the park anyway.

Updated to add: This year – 2012 (although I said I wouldn’t) we ended up staying in a cabin for 4 nights at the Canyon area. These cabins were more expensive, but were nicer, had 2 queens and a full bathroom (and a coffee maker that took k-cups!). I had thought the location would feel out of the way but it actually provided good access to the whole park. If you are planning on staying for a few days and exploring the park, it’s a great location.
Check out the next post in the series – Things to See Around Old Faithful.