It seems there is never an end to the number of things you can do to prove you are a less than adequate parent and nothing you can do to prove you are a great one. As someone who is used to being able to be successful when I put my mind to something, this can be a difficult adjustment. If you are not careful you can turn yourself inside out trying to do all the right things in an attempt to achieve something unachievable.

One of the latest topics along these lines is about 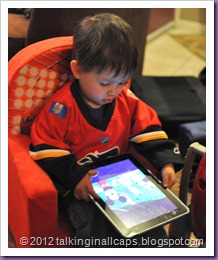 how you shouldn’t be letting your kids (especially your young kids) play with your Ipad/Iphone. With the current popularity of smart phones and tablets and the proliferation of apps for them which are engaging to toddlers in a way that no other platform has managed to previously reach, this is really no surprise.

Every new form of media is subject to this criticism. Today, we are quite familiar with the criticism about kids and television, but you might be surprised to know that similar criticism was levelled against novels when they first became widely available as well.

Novels “written chiefly to the young, the ignorant, and the idle, to whom they serve as lectures of conduct, and introductions into life. They are the entertainment of minds unfurnished with ideas, and therefore easily susceptible of impressions”
-Samuel Johnson as quoted in The Cambridge History of Literary Criticism: The eighteenth century

They induce a ‘bloated imagination, sickly judgment and disgust towards all the real business of life’
– Gentleman’s Magazine, 58 (Nov. 1788) as quoted in The Cambridge History of Literary Criticism: The eighteenth century

To me, this suggests that it is not the media itself that is the issue, but what we fear it is replacing. In general these concerns boil down to: face to face communication (particularly with parents, caregivers and teachers), the instruction of morals and values, an active life style and engaging in diversions rather than productive work (or play as the case may be). Interestingly, these can all still be levelled against reading novels.

Am I suggesting that there is no downside to limitless screen time? No, I’m simply saying it’s nothing new. Furthermore, although I have recently read a couple of articles on the internet suggesting that we are using Ipads and Iphone as digital pacifers (certainly true at least in some cases and I’m not convinced that is always a bad thing) as well as the assertion that these devices with young children results in speech delay. However, although we may find this to be true, these are currently assumptions based on research on TV and kids and opinions (some ‘experts’ some not) rather than actual research on kids, ipads and speech development.

Ultimately, whatever the results of the studies (when they are conducted) end up being, research of this nature notoriously difficult to make real world conclusions about. This doesn’t mean that such research shouldn’t be done, we just need to be careful about decisions made based on it.

There are essentially two main methods that can be used to study concepts like this: experimental or observational. An experimental study might look something like this: half of a group of 3 and 4 year olds play with an Ipad app for 30 minutes and the other half play with blocks for 30 minutes. Then you evaluate them with some kind of measure that you had also administered prior to ‘play time’. Although the chances of any difference found between your two groups being a result of your manipulation (playing with an ipad vs not) there are a number of issues with this methodology in terms of real world conclusions.  First, the any difference is likely to be transient rather than a long term effect – although it’s possible that it may point to something long term, it’s impossible to know without examining the issue over a longer period of time. Additionally, there are a large variety of different apps that can be used with an Ipad with different levels of interactivity, educational content etc. There can also be a huge variation in how often and how long toddlers are using Ipads as well as how available they are to them.

As it is unlikely you will find parents willing to agree to participating in a study where researchers determine how much time and what apps their children can use over time, the only other realistic option is to examine Ipad use in Toddlers without manipulating it (observational study). Because of the lack of any planned intervention, it is impossible to determine whether Ipad use causes any effects found or whether they are due to some other factor. For instance, particularly at this point in time, it is a very select group of toddlers who have access to Ipads – they are going to tend to have parents that have more money than average, be tech savvy,  as well as a number of other possibilities. These factors could both be responsible for the research findings instead of the Ipad use itself. In addition, because not all groups of toddlers have equal access to Ipads, the findings may not be applicable to say, kids who’s parents have limited economic resources.

At any rate, in my opinion, as long as you ensure that your children still engage in other forms of play, get plenty of attention, physical activity and other good parenting basics, it is unlikely that your kid will suffer as a result of playing with an Ipad any more  than anything else you could do ‘wrong’.

There are also a number of benefits that I find personally to letting your toddler use your Iphone/Ipad.

1. It makes travelling easier. There is nothing that can compare with the amount of different kinds of travel friendly entertainment an Ipad can hold in such a compact amount of space. And honestly, isn’t everyone happier with an entertained toddler in a car or on a plane?

2. It can make it easier to take them to places where they have to wait. Whether it is a necessity like waiting for the doctor, or something fun like going out to eat at a restaurant, having an Ipad or a smart phone in reserve can make the whole experience more survivable and make it more likely that you won’t hesitate to do it again.

3. It can give you as a parent a much needed break. Can this be over used? Absolutely. But it is frequently different as a parent to get childcare relief on demand. If you’ve had a bad day and are in a terrible mood or are ill, are your kids really going to be worse off because they played a game on an ipad or better off because you were able to get some rest? Of course there are other kind of diversions that can be used for this purpose, this is just one method that I’ve appreciated having at my disposal.

You may have noticed that I didn’t mention any education effects on my list of benefits. Although there are things that I know Gordie has learned from using an Ipad, I don’t know it has been the best method to teach him those things, just a method. And honestly, to me, it doesn’t matter. I don’t think that any kid will suffer from not having access to an Ipad, I have found it beneficial as a parent, but kids catch on to these things so quickly, they are no danger of being behind their peers without one and there is nothing you can do on an ipad that you couldn’t do in another way.

So, do you let your kids play with your smart phone or Ipad? Does it make you feel guilty? Are there any benefits you’ve found that I didn’t think of?