When I was pregnant with my 2nd child I worried, okay about a lot of things. Which is not too far from normal for me. But one of the things I worried about is whether everything would feel like it had already been done.

Would I be excited when she rolled over for the first time? Would her first steps be all over facebook?

She’s now 8 months and many of her first milestones have already come and gone.

I was just as excited when she rolled over.  I could not have been more proud seeing her learn to crawl or pull herself up for the first time. I’m no longer worried that my excitement will be less because she’s not my first. Because they are still her firsts. And those firsts are exciting.

But it is different. With two kids, I’m more distracted and th 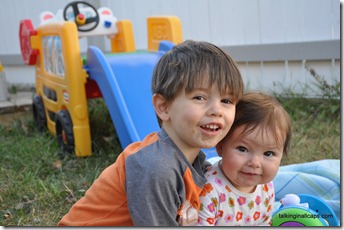 ere’s less down time. I have to put in more of an effort to write things down in her baby book and it will in all likelihood have much less written in it than her older brother’s. And more of her firsts will probably not get photographed or written up in a status update. So one day, it may look to her that I was less excited. But even if one day she feels that way, I know it’s not true.

There was one aspect of having a second child that did surprise me though. I know they’ll fight and bicker (believe me that has already started!) but I was really surprised with how much they love each other already and how young Nicole was when they started playing together. They are three years apart – I had expected it to be a long time before they would really connect. But I was really wrong about that. Gordie loves to make her laugh and already they entertain each other. Nicole’s favorite thing to play with is whatever Gordie’s playing with. She’ll chase him down the hall and cry when he leaves the room. Sure sometimes it drives Gordie bonkers when he wants to play with his toys and she’s right there trying to play with him but he adores her too. It’s hard to resist someone who loves you so much.

It’s not always easy having two little kids. In fact it often isn’t. It’s a very challenging time period. But seeing your babies develop into their own people with their own personalities is one of the most exciting things there is.