I used to take sleep for granted. I would sometimes stay up too late reading a good book  but in general I just went to bed when I was tired and got up in the morning when I needed to start my day. I don’t handle poor sleep well, so in general, I just avoided not getting enough.

I’ve never stayed up all night without sleeping. Part of me is still convinced that if I did stay up all night tomorrow might not come.One time when I was about 17 I only got 3 or so hours of sleep. The next day, I ended up getting a huge migraine complete with a migraine aura (I saw a huge geometric shape) that dissolved and then when I looked into the mirror I couldn’t see the middle section of my face. Then I went to bed.

I am not designed to party all night.

Now with two kids, I crave sleep. I day dream about taking a sleepcation, where I drop the kids off and I go to a hotel and just sleep. Sometimes I can feel the desire for sleep deep in my bones. It’s like a soul crushing ache.

Although this is not hyperbole, it’s no longer this bad all the time. Nicole is 10 months old now and most of the time she’s a pretty good sleeper. She goes down well for her naps and generally at bed time too. She still wakes up to nurse a couple times even on a good night, but I can handle that.

But like any baby she has bad nights too. Nights where she falls asleep before she’s really finished nursing while teething and so wakes up after half an hour and then doesn’t go back to sleep until 10, or 11 or even 12. Nights where she wakes up every hour and nights where she is a wake for an hour or two in the middle of the night.

It’s almost harder now than when she was a newborn because now I expect to be able to have some time to myself in the evenings and to not have extended periods of wakefulness during the night.

It was easier with one kid, if I had a bad night, then I could just nap during the day, but it’s not so easy to get a nap in when you have two kids. I feel guiltier too. When I’m a lousy mom to the kid who kept me up all night, I feel like it’s at least a situation that they created. But When Nicole keeps me up all night, Gordie gets a crappy mom the next day too.

At least know I do know now that it will get better with consistent routines and doing my best to help Nicole have healthy sleep habits. I’m also more prepared to adjust my behavior when she changes her patterns.

I know that I’ll get back to a place where my daydreams centre on something other than sleep. I’ve also learned something else. I used to have trouble napping, unless I was really really sick. But I’ve learned the secret – you just need to be chronically and consistently sleep deprived. Works like a charm.

Putting Gordie to sleep was starting to drive me crazy. I was especially frustrated because I felt like I was doing 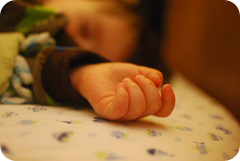 everything right. But for some reason it was starting to take forever to put him to sleep. I was racking my brain as to what the problem was.

The first penny dropped when I realized that his three hour naps had become routine instead of being an anomaly. So even though I generally think that waking a sleeping child is not a good idea, I was figuring I’d have to start waking him up after 2 hours so he would be tired at bedtime.

Then it sunk in. He wasn’t tired at bedtime. I was trying to put him to bed before he was even remotely sleepy. He in fact wasn’t having a sleep problem at all. He was waking up happily at 6 in the morning, going down for his nap like a dream and was in a good mood all day. He just wasn’t ready for bed when I expected him to be ready for bed.

I was the one with the problem. I was grumpily being woken up at 6, I was tired all day and I was frustrated when he wasn’t falling asleep after over an hour of me trying to put him to sleep.

So instead of trying to change Gordie’s sleeping patterns, I decided to change my own behavior. The first (and easiest thing) I did was start putting Gordie to bed when he was actually tired at 9. The second thing I’m still working on. Going to bed earlier. I think that might make a lot of things better.

The first day I tried the new plan it was wonderful. Gordie got some extra time with his dad in the evening and when I turned the lights out at 8:45 he was asleep 15 minutes later.

Of course though as soon as I figured this out, Gordie got a cold and was only napping for 2 hours and crashing at 8pm. Figures.