One of the things that has surprised me the most since becoming a parent, is how much I would be plagued with guilt and doubt. For me this was especially true when Gordie was a small baby. Everything was so new and it seemed I was constantly having to make decisions that had no real right answer.

But the guilt and doubt I felt over these day to day decisions was nothing compared to how I felt when Gordie turned 1. That was when we found out that he wasn’t growing as expected. His weight was at the 3rd percentile. Now I realize that sometimes this is nothing. Some kids are just small. But the reason that they take weight and height measurements is because sometimes something is wrong.

When Gordie was born he was 9 lbs. That put him at the 85 percentile for weight. So being at the 3rd percentile after 12 months was definitely concerning.

It turned out that he was having a problem digesting dairy. He seems to react negatively to the protein in milk products resulting in a host of problems some of which I recognized as a problem and others that I didn’t until they went away.

It has now been a year and I still struggle with the guilt that I feel over this.

It really shook my confidence as a mother. I was second guessing all the choices that I had made with regards to how I chose to feed him, sleep choices – everything.

Now I know this is not particularly rationale. I know I’m a good mom. I do. 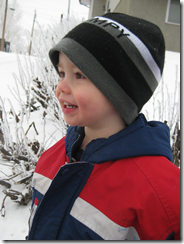 And I know that Gordie’s problems with milk were not my fault. In fact when I look back, I had realized that something was the matter and I was doing everything I could to figure out. I can’t even think of anything that I really should have done differently. And I know that it was in large part because of me that we figured it out as soon as we did.

Gordie is currently thriving and as of his 2 year check up is now back up to the 25th percentile.

And yet. The guilt is still there.

I do my best to forgive myself and to have realistic expectations for myself as a mother. Most of the time I think I succeed. But I still can’t quite shake the guilt I feel over this.