Last night it started to snow. In April. Not even early April, but April 13th. I was not impressed. I’m quite done with winter and snow in particular. 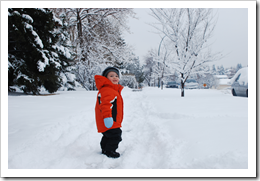 nowing!” with the enthusiasm of a child who had been hoping all Winter for just one day of snow.

This morning when I looked outside there was over a foot of wet, heavy snow. Seriously? I am almost desperate for Spring. I need sunlight again. And grass. Remember grass? I don’t ever want to leave the house again.

But Gordie takes one look and demands to “Go play in the snow!” He couldn’t have been more excited. 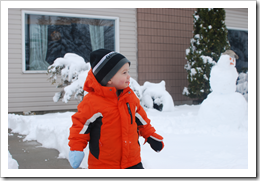 etting us both into our snow gear. Gordie had the best time and honestly, it was the best part of my day too. Usually the snow in Calgary is too dry to stick together, so it’s nearly impossible to make snowmen and it’s usually unpleasantly cold at well. Today the snow was perfect and it was right around freezing.

It’s hard to stay in a bad mood when someone around you is having so much fun. That being said – snow in April still sucks. 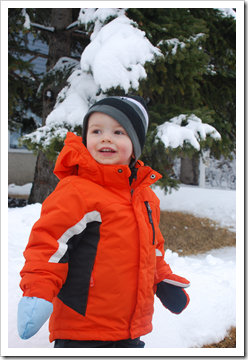