Yellowstone National Park has the largest concentration of wildlife in the lower 48 states. Wildlife spotting was probably my husband’s favorite part of Yellowstone and it helped keep Gordie amused too while we were driving around the park.

You are probably more likely than not to see wildlife while you are in Yellowstone, even if you are only there for a short time. But remember to keep your distance and do not feed any of the animals. All of the animals in Yellowstone are wild no matter how tame they may seem.

The animals you are most likely to see in Yellowstone are bison.  Although at one point the Yellowstone herd was down to less than 50 bison, the herd in Yellowstone is now of the the largest in the US at  3500. Sometimes they can cause quite the traffic jam as they wander along the road. They can be found all along the Western areas of Yellowstone during June and July but by August you may need to go to the Hayden Valley to see them (between Yellowstone Lake and the Canyon area). Although they do not seem as dangerous as wolves or bears they are responsible for more injuries and even some deaths. It can be sometimes be difficult to keep the legal distance of 25 meters away, but make sure you do not approach or cross in front of them. 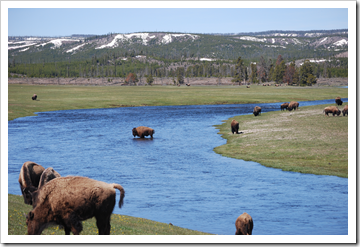 We waited on the path pictured below for 20 minutes waiting for the bison to move away from the edge of the path. Although a few people went by, no one with kids did. 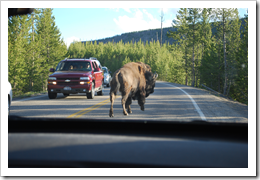 Bears are a lot less commonly seen while in the park. They tend to be in the North East areas of Yellowstone. If you are interested in seeing a bear, pay attention to the other cars on the road. If there are a lot of cars stopped somewhere (and lots of fancy cameras) someone has probably spotted some unusual wildlife like a bear or a wolf.

We were on our way to a restaurant when we spotted a bear on our last day in the park. My husband got out to see if he could get a picture while Gordie and I waited in the car. Gordie – “Daddy’s looking for bears. I’m not. I’m looking for the restaurant.” 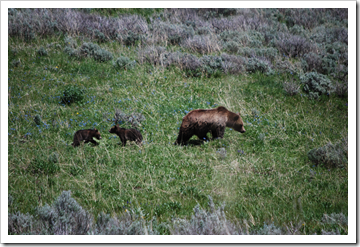 Elk are plentiful in Yellowstone. They are commonly found in the Northern areas of the park (Mammoth, Tower/Roosevelt). 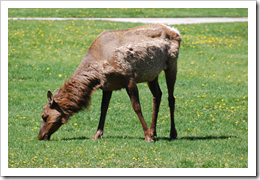 Wolves are not seen very often by visitors to the park because they tend not to hang out around populated areas during the summer months. This year was a late, cold spring, so we ended up seeing wolves on three occasions. The first time is pictured below, on the road to the Grand Teton National Park. The guy in the picture is crazy. Although legally, you only have to keep 25 meters away from them, it’s recommended you keep 100 meters away (like the bears).  We also saw one running across a field near the Old Faithful area and far far far away (I saw it through a telescope) we saw two wolves feasting on an elk. 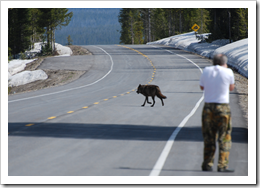 Although historically mountain goats haven’t lived in the area, they’ve started to colonize the northern rocky areas of the park. 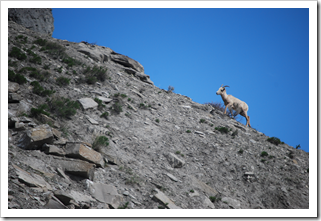 There is  a lot of other animals that you may see too, including moose, small mammals, numerous birds and even snakes. 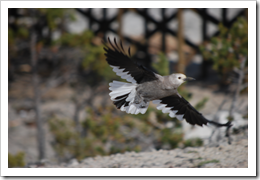 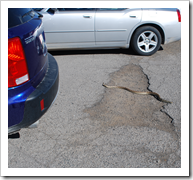 The snake above is actually just a bull snake. Which are harmless, but it looks like a rattlesnake. This is a good strategy for its threats from most other animals, but unfortunately for the snake, looking like a rattlesnake gets you killed by humans.