We stopped in at the Mount Rushmore after leaving the Devils Tower. They are relatively close to each other (okay it’s about 2.5 hrs) and neither should require more than half a day each, so together they make a really great travel day. 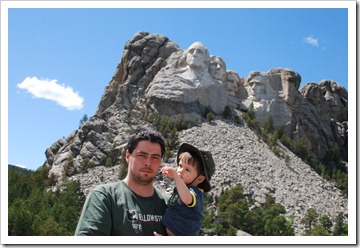 Passport Stamp: Inside the Visitor Centre.
Accommodations: You can stay at nearby Rapid City, SD. Rapid City seems to have every kind of tourist attraction you could think of, Waterslides, Minigolf, Petting Zoo etc.
Approximate Time: 30 minutes – half a day
Worth the Trip: It is definitely something to see
Jr. Ranger Program: Available in the Visitor Centre (you will need approximately 1 hr to complete it)
Admission: Admission is actually free but you need to pay for parking ($11) which is not covered by any National Park pass. This is good for all year. 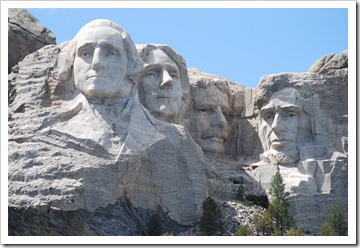 I wasn’t really sure what to expect at Mount Rushmore. I asked my husband along the way whether it was going to seem majestic or kitschy. In the end, it wasn’t either. The view of Mount Rushmore you typically see is in the picture above. That had always given me the impression that it was the mountain. But as you can see in my first picture, it’s actually quite a bit smaller than I had expected. It’s still huge, but it is only carved into a small part of the mountain. So it didn’t seem tacky, but it didn’t have the overwhelming presence that I was expecting either. It is really an amazing feat of human engineering, but I can’t say that I really connected with it. This I suspect was due to, as a Canadian, it just doesn’t represent part of  my history. 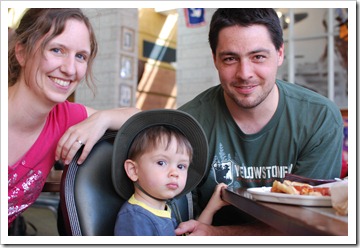 We didn’t spend a long time at Mount Rushmore, we were trying to get to the Minuteman Missile National Historic Site and Badlands National Park later that day, so we missed all of the museum areas, walks and kids exploration area. We did stop for lunch and a woman there asked to take Gordie’s picture and then offered to take one of our family for us. I’m glad she did as it ended up being one of the few with all of us in it. Gordie looks a little suspicious 🙂

If we were to go again, I think I would save it for later in the day and get there just before dark. I don’t know if you could get a full appreciate for it without seeing it during the day. But in the evening they do a lighting ceremony which includes a ranger talk, and a film and concludes with the lighting of the sculpture. It starts at 9pm May 8th to August 13th and 8pm August 14 to September 8th.

Stay Tuned for our trip to Badlands National Park. If you missed the Devils Tower, Yellowstone or my tips for taking kids to National Parks/Monuments be sure to check them out too.