(I wrote this just after I had Nicole, but only managed to actually publish it today – 3 months later) 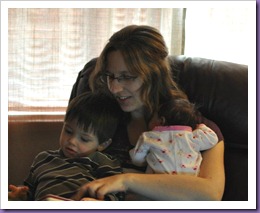 Okay, so it’s not a lie exactly. Our baby Nicole was born last week (8 lbs 10 oz) and we’re now settling in at home. We are both healthy and happy and doing really well. But it sure leaves out a lot of details and makes things sound a lot better than they really are. I think sometimes lies like these can really hurt other women. When you are in the same situation, you compare yourself to your friends and don’t seem to measure up. But you’re not comparing yourself to their reality, just what you see, just what they show you. Even when things are going really well with your new baby, things are still hard.

Lie #1. We’re happy to be home and are doing really well.

What this really means: I’m really hormonal and burst into tears at the drop of a hat.Seriously, someone tells me that my son is doing well at Grandma’s and doesn’t seem to miss me – tears. Someone tells me that he misses me and wants his mommy –tears. I can’t even remember all the things that have made me cry this past week. It is getting better. Yesterday it was only a few times, but writing this paragraph has made me cry too.

My body is sore and fatigued. I feel worn out just from making dinner. Not even cooking anything spectacular – I carved a rotisserie chicken, spooned out a couple salads and warmed up some beans and tomatoes and was exhausted. Nicole was born via c-section – my stomach hurts. It’s generally controlled with advil and tylenol but it’s still tender and uncomfortable.

This is also true. She’s been latching like a pro from the start. Honestly, I don’t know if it was possible for it to go better. But it still sometimes hurts just from the power of her suck. A couple times one of my nipples bled a bit from where she shifted and chomped down too close. Sometimes I have to re-latch her a couple times to get in a good position. Sometimes it hurts just because my breasts are really full. Even when it’s going really, really well, doesn’t mean it’s easy.

There are more lies like this that I could talk about. But honestly, I’m just too tired to write any more. But things are going really well, really.

Did you de-emphasize your difficulties after having a baby? Did it seem harder for you than it did for everyone else?