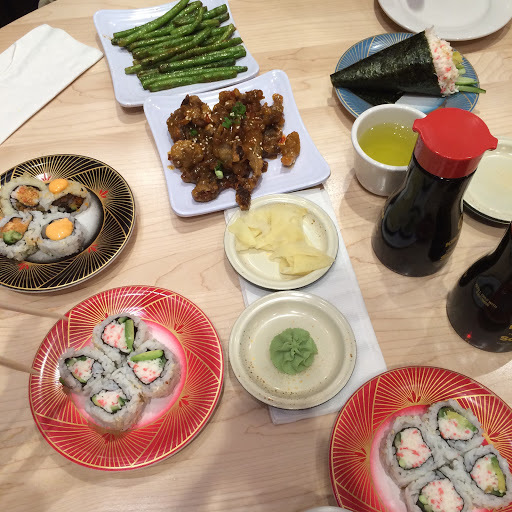 Taking kids out for dinner can be challenging at any time but going to a restaurant where they are serving food they are unfamiliar with can be even more of a headache. That doesn’t mean you have to give up on your favourite restaurants.

Tips for Eating Out with Kids in New Restaurants 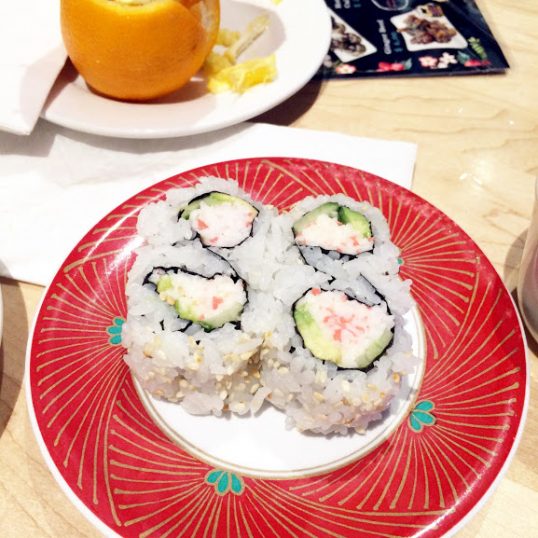 Different restaurants’ menus will vary but here are some ideas of things you may find. It can help to look at the menu online before going to the restaurant and plan out what you will order before going in.

Not all kids will be willing to try sushi rolls, but your kids may surprise you so don’t completely discount them. Many kids enjoy the mild flavour and creamy texture of California rolls, the sweetness of Mango rolls or the plainer avocado, or cucumber rolls.

My daughter wants nothing to do with rolls but sushi restaurants usually have many other options as well.

Those are some of the things that have won my kids over at Sushi restaurants. What has your reluctant foodie enjoyed (or at least was willing to try!)? 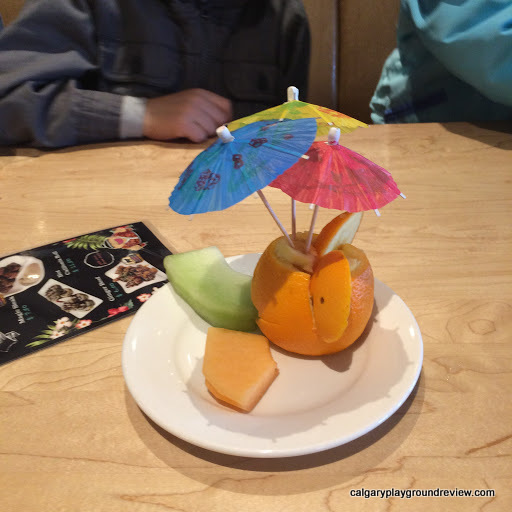 We stopped in at Angel’s Drive In after spending some time at nearby Baker Park. Angel’s Drive In was undamaged in the flood and only had to close for one day but I imagine they are still finding business to be down. They are perfectly located for picking up lunch for a picnic lunch or grabbing dinner on the way home for a day out at Bowness Park. Unfortunately, Bowness Park is still completely closed. Angel’s Drive In is a Calgary Institution. It’s located in a small blue building that I was surprised to find out also has a small restaurant area inside. We ran through the drive through and ate at the small picnic area beside the parking lot. My mom got the Deluxe Burger – ketchup based sauce, cheese, bacon, lettuce, onions and tomato – because being at the Drive In was making her feel nostalgic. The burgers were huge. I tried my best to capture that in a photograph but you are just going to have to trust me. They are good sized burgers. They are also really good. This shouldn’t be surprising as Angel’s has been around for a long time but I wasn’t really expecting too much. This was our first time to Angel’s Drive In but it definitely won’t be our last.

Have you been to Angel’s Drive In? What did you think? Fat City Franks is one of our favorite restaurants in Calgary.  It’s also one of the few restaurants that my special needs brother likes going to. So we end up going to Fat City Franks fairly frequently. One of the things we love is that it is owner operated. Jane and Bob really take pride in what they’ve built and always seem happy to be there. Fat City Franks did not receive flood damage, but had to close for days due to power outages in Mission. This was costly both in terms of food that had to be thrown out, and lost revenue. They are finding that business is still down as people are still moving back into the neighborhood. The restaurant is small, casual, bright and clean. I love coming here with our kids because it’s quick too. Over the last few years, I’ve tried every hot dog on their menu and many of their monthly specials. They are all good, but my favorites are the Chicago Dog and the San Antonio Black Bean Chili Dog. I also really like switching the hot dog for a farmer’s sausage. Pic of Gordie from 2 years ago

Although they have great menu options, they will also prepare a custom hotdog for you.  Gordie’s favorite used to be ketchup, then ketchup with tomatoes and mustard. And now plain. If you like hotdogs, I would highly suggest giving Fat City Franks a try. Their malted milkshakes, potato salad and coleslaw are great too. (They’ve been profiled on “You Gotta Eat Here!” too)

Super short Clip of Fat City Franks including the Chicago Dog with a Farmer’s Sausage and a Ukranian Dog:

Have you been to Fat City Franks? What did you think?

We stopped in at Spolumbo’s for lunch after playing at the nearby  Nellie Breen Playground. I had heard that they had just reopened after repairing the damage from the Calgary flood this year. I love buying Spolumbo’s sausages at the grocery store but don’t often get a chance to go and eat at their deli. My mom and I both ordered the hot sausage on a bun. I’ve had it before but it never disappoints. The spiciness is not overpowering and the marinara sauce complements it perfectly. I found it to be just the right amount of food for me, but if you’re a big eater, you may want to get a side or one of the biggest sandwiches. I wasn’t sure at first what I was going to get for the kids. The sandwiches are pretty big (although you can get mini-versions). In the end I bought the fruit salad and a plain sun-dried tomato chicken sausage for the kids to share. It was perfect! The fruit salad was huge (especially for $6) with lots of variety and the kids thought the sausage was pretty darn good too. I also picked up a Spolumbo’s Special to take home for my husband. It was big enough for him to use half for lunch and the other half for dinner. I found Spolumbo’s to be pretty kid friendly too. The atmosphere is pretty casual and they have a couple booster seats and high chairs. There are no kids menu’s but they have salads, mini-subs and sandwiches, and mild sausages.

Have you been to Spolumbo’s what did you think?